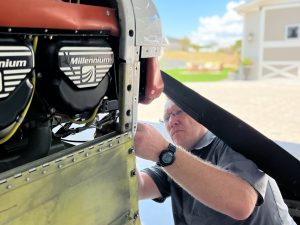 When a maintenance shop is backed up with work, they often suggest deferring minor squawk items until the next annual or next major service. While there is nothing inherently unsafe about taking this approach, it can lead to other problems, or, at a minimum, detract from the joy of flying a plane in perfect working order.

In other instances, when critical or necessary maintenance needs to be done on your plane, it can often take 4-6 weeks or more before being able to get your aircraft on a shop’s maintenance schedule….and the wait to get your plane back can seem to drag on indefinitely.

At TravelTech, we realized that many discerning owners and operators want the absolute best maintenance done on their aircraft in a timely manner.  The journey to TravelTech Started about 15 years ago when Chet Krushefski was flying a Beech F-33A Bonanza.  After a few canceled trips due to a leaking brake caliper and a failed magneto, Chet thought there had to be a better way.

As an Engineer and having good mechanical skills, Chet took matters into his own hands and gained the support of his good friend and mechanic.  His friend began guiding and supervising the work that Chet performed on his aircraft and the aircraft of others and fixing a leaky brake caliper evolved into fixing whatever needed to be addressed whenever it needed it.  Annuals became less and less of an event as, during the course of the year, continual maintenance made it such that there simply wasn’t much to fix on that F33A (even after taking it to a Beech Maintenance Clinic). 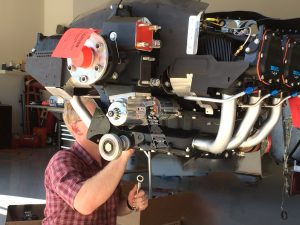 While doing this work Chet continued to expand his flying experience and purchased a Piper Saratoga. His family of 7 eventually outgrew the Saratoga and he now flies the Family on trips in a Piper Navajo Chieftain which he maintains as well.  Over the past 12 years Chet has never had to cancel a trip for a maintenance issue.

It occurred to Chet that while it isn’t for everyone, there are folks who share his desire to keep their planes in top condition with the ability to have any issues addressed as quickly as possible.

If you are a discerning owner/operator that wants everything on your plane working all of the time, then our service is likely for you.  While we can’t guarantee that things won’t ever break, we employ a pit-stop mentality to getting work done, and work with a sense of urgency that is difficult to find in the industry.